Remnant: From The Ashes 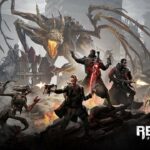 At first, for all you guys out there who don’t know what this game about, simply, the game is about a chaotic world drenched in darkness and evil. Interdimensional foul beings or fiends have conquered this world. Your character is one of humanity’s last remnants.

You will be swarmed by these interdimensional monsters, fiends, and foul beasts in this world while you are trying to survive alone or alongside your fellow human remnants. The human remnants devoted hope is to rebuild and restore humanity in the world to its former glory by facing these vicious, hideous creatures and gaining a foothold and taking back what humans have lost.

Now that you are familiar with the game’s core theme let us start with the Remnant from the ashes review.

Remnant From The Ashes Review – An Overview

Remnant From The Ashes Review – Gameplay

In this Remnant from the ashes review, we will be discussing multiple points the game revolves around.  We will start with the game’s gameplay, and the gameplay will also include three subcompartments: Character Design and Combat. With that said, let’s begin.

The Remnant from the ashes’ gameplay is strikingly similar to every soul-like game. The gameplay has a thrilling experience with the faint temptation to explore the game’s vast world.

The game has a challenging gameplay difficulty that revolves being a shooter-focused RPG game and depends mainly on your armor set. This is somewhat a departure from the soul-like gameplay experience having to use machine guns, pistols, and shotguns instead of regular traditional weapons like swords, axes, and spears, giving the game a different yet paradoxically similar soul- like feel.

For the challenging part, Remnant from the ashes suffers from an inconsistent difficulty curve, and it slightly more confusing when explained by the game’s developer (Gunfire Games). Furthermore, the game suffers from overly repetitive level tile visuals to the point it sometimes hinders a player’s sense of progression.

The gear score is one the game core mechanics that frustrate new players, breaking the norm of having the game increase its difficulty procedurally (as you proceed with the game). This new mechanic might confuse new players into thinking gear upgrading is a critical part of the game. Sadly it is not.

In our Remnant from the ashes review, we have to be honest with you guys. The game still rewards players’ curiosity, where interesting items or gear can be found in the corners of the many repetitive maps or tilesets in this game.

The character design is really polished for a AA game, offering the player a wide range of classes or archetypes. Each class has its own strength and weaknesses, which can be portrayed during gameplay.

You are presented with three classes:

The scrapper strength comes in melee and short-range combat, armed to the teeth with a scrap hammer as the primary melee weapon while having a shotgun and a repeater handgun or pistol.

This class likes to deal with the monster up close and personal, similar to traditional soul-like games with their Hot Shot mod. It gives them the ability to imbue their ammunition with fire, handing them out the ability to set their enemies on fire.

As we mentioned, the Ex-Cultist usually acts as fire support with the team, donating to their teammate some area effect heals to restore their HP gradually.

We can’t finish our Remnant from the ashes review without mentioning this unique class. We really loved this class since GamersTechLab number one fan is a camper. Yes, we have said it, he is camper.

Jokes aside, the hunter class specializes in being stealthy and hunting creatures from long range, making it a long-range combat specialist. Moreover, it also can provide fire support to other teammates with its hunting rifle.

This class has an ability called the hunter’s mark, which marks an enemy monster to make it easier for The Hunter’s teammates to find the targets through walls, think of it as an X-Ray vision ability. Also, this ability increases the critical hit chance against marked monsters. This class comes armed with a Scrap Sword, a Hunting Rifle, and a Repeater Pistol.

What we want to conclude from our Remnant from the ashes review, the game is TPS (third-person shooter) game, and in some sense, a survival RPG game set in a post-apocalyptic world overrun by interdimensional evil monsters.

The combat is quite satisfying for the gameplay, offering a quick and responsive gameplay experience, especially in combat scenarios. Below, we have explained some of these combat mechanics utilized in the Remnant from the ashes gameplay:

After a millennium, an unknown interdimensional race of monsters who call themselves The Root traveled from their realm to another to wreak havoc and destruction, conquering everything and everyone who or that comes in contact with them. During their conquests of neighboring realms, they stumbled upon the world of Rhom, where they faced a never-ending battle between the civilization of Room.

Eventually, they conquered Rhom and took hold of its resources and people, but the states of Rhom united together, including The Basha and their spiritual leader The Nui, stood their ground and did what they can to fight The Root.

In our Remnant from the ashes review, we wanted to give you a simplified version of the whole story. So, basically, that was the entire story in short.

Remnant From The Ashes Review — Graphics

In today’s Remnant from the ashes review, we found that the game is addicting, especially if you are enjoying it with any of your friends.

About its graphics, the game provides incredible colorful sceneries. Although the game has all of these magnificent maps, the graphics are neither realistic nor stylish. The game graphics only fall in the middle, which is explainable if the publisher is catering to a younger audience.

The character models are on the plain and generic side, while the surrounding environment looks rich and immersive. The maps or tilesets are procedurally generated, making the replay value extremely rewarding and gives a new game experience feel. Unfortunately, with this feature, the game suffers from having repeating generated areas, which makes it seem to be copy and paste or reversed copies of the same tilesets.

The monsters included in the game look alright, more concepts designs should be explored further and be added to the game to enrich the gameplay experience.

We would have loved to see an in-game benchmark tool because this really helps out the reviewers with their performance testing.

The game still needs some performance optimization. However, in our Remnant from the ashes review, we enjoyed playing this game despite its glaring setbacks. We would be looking forward to a DLC or a possible patch fix to polish these issues out.

Remnant From The Ashes Review—Music And Sound Effects

What made us love the game more is the. As far as the soundtracks go, the music plays a significant role in this game. Each soundtrack is exquisite and heightens the gameplay action itself, making an integral part of the game. It just essential to the experience as everything else in the game.

Final Thought On The Remnant From The Ashes Review

To be honest, we enjoyed ourselves while making Remnant from the ashes review. We enjoyed the exciting musical soundtracks and the sound effects of the game.

We hope you enjoyed and got some excellent information from our Remnant from the ashes review. And like always, Let us know if you want any PC part to be reviewed. Don’t forget to share and comment in the comment section below with your basic system configuration and what you like us to do next.