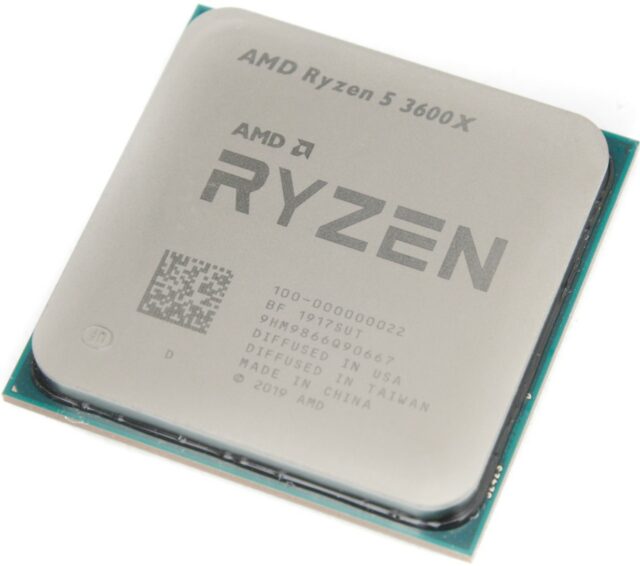 The red giant AMD has dominated the CPU market for quite some time, with its new Zen architecture. When AMD first launched its new Zen architecture, it offered a good alternative for INTEL’s line up. With its Ryzen 5 1600x, this processor was packing 6 core and 12 threads configuration, a huge jump in multitasking workload. Still, it lacked in single-core performance. Some Zen Architecture went into incremental changes through Zen+ fixing its ram support and many other latency issues until it reached its new refined mature state, Zen 2.

The Zen 2 Architecture introduces multiple improvements. Higher base clocks and overclocking headroom, higher ram frequency, and many, many more.

In our AMD Ryzen 5 3600x review, we will be inspecting and analyzing the Ryzen 5 3600x and seeing what makes this processor the gamers’ number one choice. How did AMD achieve all of this, what new technologies present in this modern architecture? So without further ado. Here is our review.

To start our AMD Ryzen 5 3600x review, we must judge what this new processor offers objectively. We will be giving our unbiased opinion, and in order to that, we will be commenting on its single and multicore performance in single-threaded and multithread workloads. Additionally, we will be displaying AMD Ryzen 5 3600x‘s strong points and its weak points. Just like in our regular fashion.

Since the INTEL Core i5-9600K is AMD Ryzen 5 3600x’s lineup equivalent competitor, its pricing is comparable to AMD’s offering. We will be comparing these two since they are both unlocked CPUs, and due to their nature being budget gaming processors that most gamers grab when building their gaming rigs. So let’s get started.

Another thing to add is that the INTEL Core i5-9600K does not come with a stock cooler. Meaning, not only are you paying $13 more, but you are also behind in budget because you will have to purchase an aftermarket cooler. Well, that’s a bummer.

Truth be told, INTEL still gives you some value; this value gives you integrated graphics. Although it’s not that big of a deal, it can come in handy sometimes, especially if you want a running PC till you save up more money to buy that beefy graphics card.

Yes, the AMD Ryzen 5 3600x is a great processor for people who are multitasking power users and who like to game from time to time.

This CPU is also a great entry option for people who love to stream as well. With its 6 cores and 12 threads, it can handle almost anything a streamer might through at it to some extent. Not to mention the multicore performance that crushes its competition benching at 3751 points in Cinebench R20 comparing to INTEL’s 9600k 2624 point.

With that said, The AMD Ryzen 5 3600x works best in multithreaded workloads. Such as Blender, Adobe Premiere, Photoshop, and a perfect budget option if you plan on gaming and online streaming.

These process optimizations grant AMD’s new CPU line up +15% IPC (instructions per clock) higher than the previous generation, which is truly remarkable. Which also translate in +11% to +21% increase in gaming performance at 1080p.

It offers a lot more value compared to INTEL’s counterpart, the I7 9600k, priced at $249, making it a great option for those who are planning who want to game, stream, multitask, and some video editing.

Not to mention the value that comes from flexible motherboard tiers ranging from low-end A520 to the mid-range B550 all the way to the high-end X570.

You can flexibly pick and choose which motherboard is suitable for you and your budget.

From what we have seen so far, The AMD Ryzen 5 3600x processor is a commendable option if you’re planning on building a new system in 2020. But having that set on the side, we need to put forward its weakness cause today’s AMD Ryzen 5 3600x review won’t be complete without mentioning these weaknesses.

Just like we said earlier, we need to object in our AMD Ryzen 5 3600x review to leave you with good points to help you out when you are planning to buy this great processor, this is why we need to show you this weakness. So, to do that, we will list some of the weaknesses we found AMD Ryzen 5 3600x.

The lack of having an integrated Graphics can be troublesome sometimes, especially when you are troubleshooting your gaming rig. Having that feature can come in handy in making things but easier on you when conducting a hardware diagnosis.

Still, we have to admit that some people prefer having this feature simply because they like to save up and buy better Graphic cards.

This could be explained due to the nature of the current games being dependent on high clock single-core performance. Still, we found some decent comebacks for the AMD Ryzen 5 3600x in performance in more multithreaded optimized games such as Assassin’s Creed Odyssey and Battlefield 5 and many new titles. With more game titles built with the latest advanced APIs like DirectX12 and Vulcan.

Nevertheless, the AMD Ryzen 5 3600x still a great valuable CPU, especially if you are planning on buying the AMD Navi 6000 series GPUs and NVIDIA’s 30 series cards. This care utilizes the new PCI-e Gen 4 to its fullest. Meaning, it is really a great option if you’re planning on future-proofing your gaming setup.

Most Reviews have hand-on experience or an unboxing Experience. This why in our AMD Ryzen 5 3600x review, we will talk you thought our first look and unboxing.

The AMD Ryzen 5 3600x Package comes in packed in a compact box made up of white cardboard from the inside, with the Ryzen symbol is gracefully displayed inside an orange halo. The whole package comes in a grey color. Some detailed information is seen on the back of the box, showing the CPU model and tier. On the other hand, you will also be able to see all the hardware specs and technical information like frequency, etc.

Opining this elegant box, you are greeted with the following:

? AMD StoreMI Technology: This is a new feature specially made for the enthusiast community trying to find ways to squeeze more performance out their systems.

This feature improves system responsiveness making it more snappy. Also, it enhances the system’s boot times, load times, and file transfer within the system. Basically, its job is to accelerate your HDD storage automatically using your SSD.

? AMD SenseMI Technology: this Feature monitors and tunes your CPU package’s temperature, clock speed, and voltage to achieve better IPC performance without any increase in power.

All of this is done using AMD’s new Neural Net Prediction hardware installed inside the CPU package.

? It Works Best For Those:

? It Won’t Be Much Useful For Those:

Although this decent processor falls a bit in the multitasking department compared to the Ryzen 5 3600x, it is still a good solid option if you plan on gaming and getting high framerates. It comes with 6 cores and 6 Threads, clocked at 3.70GHz base clock and 4.6GHz.

The big bummer, it comes with Hyper-threading turned off, which explains why it falls short in multithreading workloads. However, It is priced slightly higher than the Ryzen 5 3600x at $263 MSRP.

With that said, it is still an excellent alternative offering from the blue team.

Although it’s an old Zen+ generation processor, it is still a great option from AMD. It has fairly the same gaming performance. The difference is that this CPU has 8 Core and 16 Threads, but it comes slightly downclocked at 3.7GHz Base and 4.3GHz Boost clock. There slight differences like the box cooler, which is a bit beefier than the 3600x box cooler. Everything is nearly similar to Ryzen 5 3600x from a gaming performance perspective. But in Multitasking, this processor is far better in multithreaded workloads.

We think this is more valuable when considering its price offering. This processor is priced at nearly $220.

Another Blue Team Option is the INTEL Core i7-9700K. This monster comes packed with 8 Cores, 8 Threads, and Hyper-threading turned off, which means it won’t be that great in multithreaded workloads. But it can boost up to 4.9 GHz clock speed across its 8 Cores.

Still, with no Hyper-threading, this processor is e a considerable alternative from INTEL if you are planning on gaming on high frame rates and high refresh rates. However, you will have to invest more to buy this CPU. This processor is priced at $380 MSRP, making it the most expensive option for the Ryzen 5 3600x processor.

We concluded in our AMD Ryzen 5 3600x review that the CPU is really priced aggressively against INTEL Offering. And basically crushes the competition without any doubt. It delivers superb gaming performance and decimates INTEL’s whole competing line up in Multi-Core and Multi-Threaded Applications.

This is truly a great and valuable processor, one of them, if not the best CPUs out there for budget gamers. The 6 cores, 12 threads, and a 4.4GHz clock speed is basically a great pick for people who want to game on a budget and have some slight online streaming. It’s without any doubt the best thing to spend $249 on, indeed a good deal.

We hope you enjoyed and got some excellent information from our AMD Ryzen 5 3600x review. And like always, Let us know if you want any PC part to be reviewed. Don’t forget to share and comment in the comment section below with your basic system configuration and what you like us to do next.

Please note, this review has been researched with information and/or testimonials that are available online in the public domain as well as my personal experience and research. Any recommendations and/or conclusions are strictly opinions and may not apply to, or agree with, all persons or situations. See the full disclaimer for more info.

? This page includes affiliate links. Please be aware we only promote advertising from companies that we feel we can legitimately recommend to our readers. Please see our Affiliate Disclosure for further information.

How To Make Windows 10 Fast? 4 Easy Ways To Speed Up Your PC